A pre-inquest hearing into the tragic death of JFS student Mia Janin has heard how Snapchat accounts that may contain vital evidence were deleted on teachers’ instructions just five days after the 14-year-old s is committed suicide.

Detective Inspector Gail Steele, who is leading the Metropolitan Police investigation into Mia’s death, told the hearing, which was observed via Zoom by the Janin family, that school staff from Kenton had told students to remove the information, in line with new regulations giving the school authority to remove content from students’ social media.

Appeals to social media companies that Mia and her classmates used to release key data were not granted and Coroner Andrew Walker was asked to warn the companies that the data will be kept for the inquest police in progress. It was also revealed in court that police are awaiting statements from other adult witnesses and an unnamed rabbi.

The hearing was adjourned to September 15.

Mia took her own life on March 12, 2021, a day after she returned to school when the lockdown ended last year. Her father, Mariano, is now begging parents and students at the Kenton school to come forward to help him find out why.

He believes toxic social media posts or videos may have led to the death of the 10th grader, who his classmates believe was bullied.

“This whole experience has been a nightmare too horrible to explain,” Mariano said. The Sunday Times. “Every day, I feel like I’m living in slow motion. Relatives with information – please take it to the coroner. We need to know what happened for the sake of the other children and also for Mia. Do not close ranks.

Mia has become the third Jewish public school student to die by suicide since 2017. 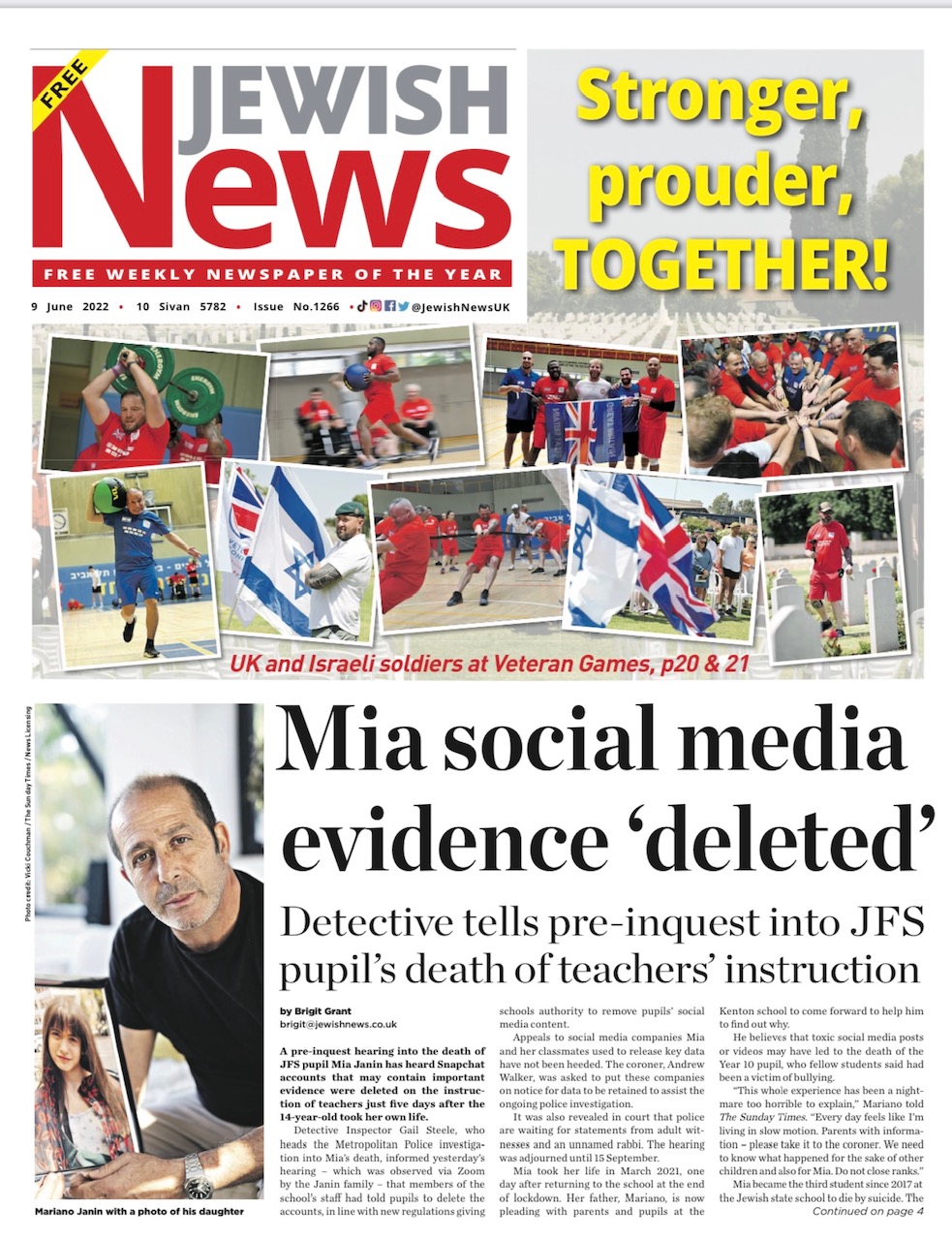 The front page of this week.

The day before her death, Mia reportedly asked her parents if she could move to another school. Investigators found she had voicemailed a friend, before the first day back, saying she was “mentally preparing to be intimidated by him”. [an unnamed pupil] and all his friends.

Mariano said he knew Mia had logged into a social networking app – either Yolo or Houseparty – just hours before her death, but did not know what she had seen, sent or received.

Mia’s phone was turned over to police following her death, but remained locked until Wednesday’s pre-inquest hearing. Mariano hopes investigators will find what drove his daughter to end her life. He added: “I don’t want another parent in my place.”

His wife, Marisa, who reunited with Mia, died of an aggressive form of cancer suddenly just months after her daughter’s death.

Mia’s death bears a strong resemblance to that of Molly Russell, a 14-year-old from nearby Harrow who took her own life in 2017 after reading social media posts. Molly’s father, Ian, supports the Janin family by demanding answers.

Ofsted investigated JFS after Mia’s death and downgraded it from ‘good’ to ‘unsatisfactory’ and said all students had been severely bullied with little or no intervention from staff.

JFS Director David Moody said Jewish News: “Following comments made to the Sunday Times which recently published an article about Mia, the school is unable to comment on an ongoing police investigation.”

“As the new director of JFS, I am confident that all possible information has been made available to the police to help them reach a conclusion. OfSTED recently rated JFS as a good school and was pleased with the sustained changes enacted by the Governors and the new management team.